Home » Behind The Music » It’s Not What You Think

It’s Not What You Think 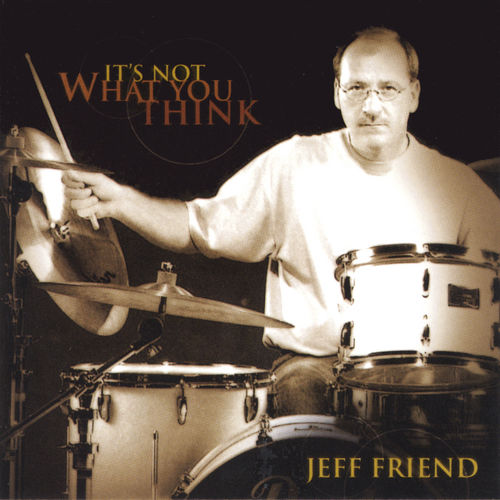 Most of the people who know me musically, know me as a old rocker (although I’m really not that old!). It’s what I grew up listening to, and playing as a teenager. But as I got older, my tastes in music broadened. The very first album I bought after buying my first “real” stereo at age 18 was Chain Reaction by The Crusaders. What a great body of work by an incredible group of musicians. I just listened to it again the other day and it still stands as a great album. So when I got the idea to do this project, I wanted to do something like that. Something that would just be good music. I don’t know that I accomplished the goal, but I can tell you this … if you know me, the music on this CD is not what you’d expect!

Forward Music – ©Jeff Friend 2003
This was the last song written for the project, and it kind of wrote itself! I really was feeling like I needed to write something a bit more upbeat, and in the process of composing, I fell into the old 12 bar rhythm and blues progression. A sucker for that jazz organ sound (I have always loved those old B3 songs like Green Onions), I initially wrote the melody based on that sound, and doubled it with sax after the song was composed. I honestly can’t remember what lead me to add the traffic sound effects, but it sure helped me pick a name for the song.

Forward Music – ©Jeff Friend 2003
Some songs take longer to write than others … and this song is living proof. I spent a lot of time experimenting with the rhythm section on this song. I really felt that the melody was strong, but just couldn’t find a good feel to go under it. What you hear on the CD is the fifth version of this song. I named it “Kinda Like Bob”, because my all time favorite jazz musician is Bob James, and even though I can’t play anywhere near his level, this song has the feel of some of his late seventies/early eighties work.</

Forward Music – ©Jeff Friend 2003
I’d love to tell you that this song was written about a trip I took to a remote island in the Pacific, a beautiful and lush tropical place where I learned these new world rhythms and played percussion instruments made of bones… but I can’t, because I didn’t. The truth is, all of the melodies on this CD were conceived while I was doing some mindless activity … like walking the dog or mowing the lawn. I would hear a melody in my head, and quickly run up to the studio to record it. Usually, I would sing the melody in senseless words and gibberish just to get the idea on tape. For this song, the word “Biahya” was sung to illustrate the chord progression I was hearing in my head. Somehow it stuck.

Forward Music – ©Jeff Friend 2003
This is the feel I was trying to achieve for the whole project. I’m a huge Sade fan, not because I like her vocal style (although I do!), but because her band can really groove. This is the type of song I can listen to for hours on end, over and over, and never get tired of. Call me crazy, but I just like those groove songs!

AND THE RAIN FALLS

Forward Music – ©Jeff Friend 2003
The groove for this song was the first thing written for the project. I liked it, because it had that cool traditional mainstream jazz trio feel, but I didn’t like it for the very same reason. This was going to be a smooth jazz project, so I abandoned the idea. One rainy day in October, after writing most of the rest of the project, I gave it another listen. Much to my surprise, the melody almost wrote itself right then and there. So after careful consideration, I added it back in the mix. I felt like the song would be a nice diversion in the middle of the rest of the songs, so I finished it.

Forward Music – ©Jeff Friend 2003
This song was written after I attended a seminar on graphic design. The speaker (Jason Moore who did the graphic design for the CD), was talking about how in art school, whenever he turned in a project, he always had to include a reference. A photo, a piece of art, or something that he used to get the idea for his project. It started me thinking about how in advertising, most of what you see are copycat ideas, Where the advertiser just cops the last trend and makes it their own. But then … isn’t that what creativity is all about?

IT’S NOT WHAT YOU THINK

Forward Music – ©Jeff Friend 2003
This was one of those songs written early in the writing process … maybe third or fourth. My goal was to write a body of work based on a smooth jazz feel, but the groove of this song just came out a bit more edgy, with a hip-hop/rock fusion feel. So, in an effort to bring it back around to the jazz feel, I chose sax and trumpet as leads, and added a bridge with a jazz vocal group sound. Yet no matter how hard I tried, this song just wanted to rock, and who was I to argue? It was at this point I realized that this project was not going to sound anything like what people would expect from me … so “It’s not what you think” became a theme for the project. 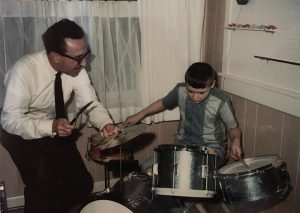 This music is dedicated to my father, H.M. “Mickey” Friend, who has gone to be with the Lord. He was in the business in his younger years, and supported me and my music from the very beginning. I just wish he were here to hear what I’m doing now.